Trustworthy and indepth news stories are more important now than ever.
Support our newsroom by MAKING A CONTRIBUTION HERE

President Paul Kagame warned this Friday, March 29, that the East African Community (EAC) was faced with serious challenges, and called for “urgent” action by the Summit of Leaders to deal with them.

The same message was echoed by the Secretary General of the community, Mr Libérat Mfumukeko.

In separate speeches at the opening of a one-day “Strategic Retreat of the Council of Ministers and Heads of Organs and Institutions of the EAC, convened in Kigali” today, Mr Mfumukeko, who spoke first, struggled to show positives from the institution he leads while President Kagame named three challenges the community faces today and that should be resolved for progress to be made.

Mfumukeko, who is from Burundi, spent about an hour going into details of what has been achieved over the years. However, in the last segment of his speech, he admitted that what is not being done is what is more damaging.

Avoiding to attack his bosses directly, he said that the repeated lack of quorum at key summits meant no decisions are being taken.

“This has caused delay in making some decisions and implementing key activities. This needs to be revisited to ensure adherence to [the] calendar of activities,” he said.

Late last year, the Heads of States Summit was cancelled twice – an unprecedented development in the history of international diplomacy and state-to-state relations since the first cancellation happened after the arrival of some heads of state. At the time, Burundi ignored President Yoweri Museveni, the chair at the time, and did not turn up for the meeting or send a representative nor communicate to his colleagues.

The leaders waited in vain and eventually called off the meeting in frustration.

And when the Summit was eventually held on February 2, the highlight of the event was the handover from Museveni to Kagame as next EAC chair.

Then came the issue of contributions from member states. As of end of January 2019, which is past half of the financial year that ends in May, the EAC Secretariat has only received 45% of the funding from partner states.

“Consequently, several activities have been postponed due to lack of funds”, Mfumukeko told the Council of Ministers.

In addition, because the Leaders cannot meet, the self-financing model that has been proposed to wean the EAC Secretariat off donor funding is yet to be adopted.

Today, the EAC operations still depend 50% on international donors.

The state of the community report from the Secretary General also shows a whole new set of non-tariff barriers that states are imposing.

It says customs and border officials are denying entry to some citizens of other partner nations. Travel documents are confiscated. And for those who cross over, Mfumukeko said, they are required to report to police stations daily.

“The secretariat has often times received complaints from the citizens on facing various challenges at customs and immigration desks,” he said.

“These [non-Tariff] not only restrict the free movement of persons as enshrined in the Common Market Protocol, but also waters-down the achievements of the Community”

Another issue keeping the bloc lagging behind its own set agenda is the apathy with which EAC laws are being adopted in national laws. The bloc’s state of affairs report shows that the Leaders’ Summit agreed in 2010 that national parliaments move quickly to harmonize all laws that have been agreed.

“In July 2019, we will be marking nine (9) years since the protocol came into force, unfortunately, some Partner States are yet to approximate or harmonise their national laws, policies and systems” with those of the EAC, said the SG.

The bloc has also adopted a common education policy, which requires that all universities across EAC charge tuition fees on students from the region as though they were locals.

Mfumukeko said that was not being done. “Students from partner states are being charged fees as if they were international students,” he noted.

Another issue, which the Secretary General highlighted concerns the regional mechanism adopted to allow university students to move to any country mid-way their course. It was adopted in 2017 by the Heads of State as a ‘Common Higher Education Area’.

This policy allows the recognition of academic certificates and the transfer of credits from higher education institutions across the region.

“University students in the region are now enjoying their ability to transfer credits across universities and study anywhere within the region,” said Mfumukeko, but did not mention a case where Rwandan universities are asking students from Uganda to start afresh as reported by The Chronicles recently.

The Secretariat also says all EAC bodies including the regional court and parliament need a review of their salaries. They want a better healthcare insurance scheme that covers not just regular sickness, but chronic and long-term illnesses.

Due to the static nature of the of the health insurance scheme that EAC staff use, there is no funding to cater for serious emergency cases.

“There have been several instances where we, as members of staff of the Community, have held fundraisings, to raise funds to help settle a colleague’s medical bill. This is a matter that needs also to be addressed,” said Mfumukeko.

When President Kagame stood up to speak, the atmosphere in the conference room seemed tense.

The podium he was scheduled to speak, was placed in a bizarre position. It was at the back of the main table where President Kagame was seated together with the SG and heads of the regional court and parliament.

Kagame said he would speak from his seat, to be able to be closer to everyone in the room.

The President also pointed out that when he entered the retreat room, there was unnecessary seriousness.

Kagame said that his experience showed that if they wanted to do as much work it was important to “start by just being relaxed”, adding that they needed to “loosen your neckties” and “your minds should be allowed to wander”

As he spoke, he himself was in a suit but without a necktie.

Though he did not mention it directly, Kagame seemed to be hinting at the closed door national retreats in Rwanda where officials dress up casually. None is seen in the formal office attire.

“Ten years ago, a similar retreat was held [in Kigali] and it resulted in some good solutions that have contributed to furthering our East African agenda,” Kagame said, as he moved into reading his prepared speech.

Kagame said the retreat and the bloc’s leaders needed to address three challenges.

Firstly, “We urgently need to get our house in order…,” said Kagame; adding that the second issue is: “We have to urgently unblock obstacles in ongoing projects and to allow ourselves to finish the good work we have started together”

The third issue, which the president said should guide the retreat was: “There is nothing wrong with being ambitious”

He noted: “Many of these require little more than political will. Even small triumphs generate so much goodwill and increase the trust of our people in the EAC. So why deprive ourselves of success that we need, and that is within reach?”

Kagame said the EAC should be a driving force to ensure full implementation of the African Continental Free Trade Area (AfCTA), which is left with only one country to make it 22 national ratification needed to make it law on the continent.

“As we approach the 20th anniversary of the renewal of the EAC, getting these things right, and steering the Community in the right direction is the best gift we can give the citizens of East Africa,” he concluded.

After that, the retreat went into the closed door sessions which are scheduled to last an entire day. 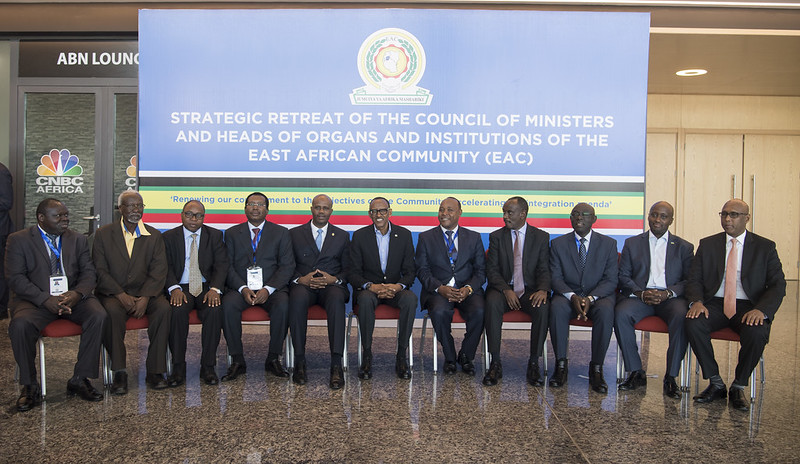 President Museveni: Rwanda-Uganda Conflict Will Not Be Solved On Radios

Why There Are Less Power Outages In Rwanda Compared To Region